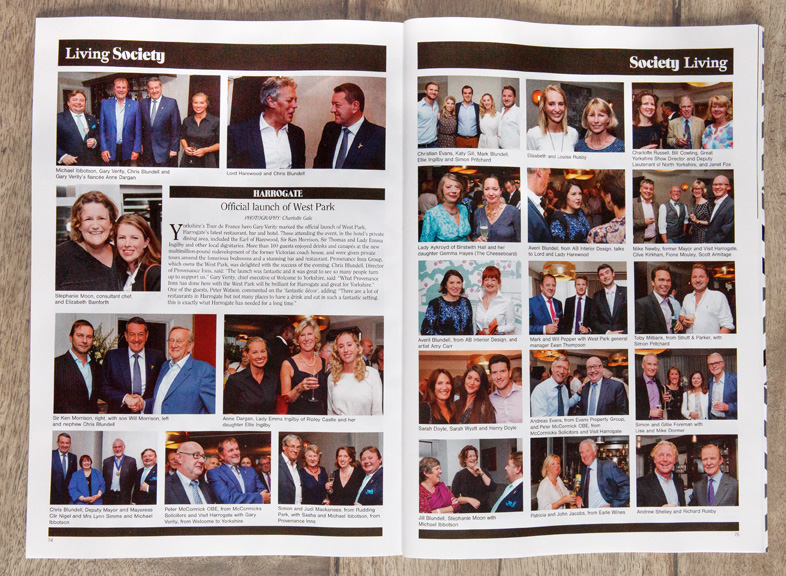 A few weeks ago I was delighted to be asked to photograph the official launch of West Park, Harrogate’s latest restaurant, bar and hotel.

The event, held in the private dining area of West Park, was enjoyed by over 100 guests including the Earl of Harewood, Sir Ken Morrison, Sir Thomas and Lady Emma Ingilby and other dignitaries.

The guests enjoyed drinks and canapés at the new multi-million pound redevelopment of the former Victorian coach house, and were given private tours around the bedrooms, bar and restaurant.

Celebrations were high on the list as it was revealed during the evening that Provenance Inns Group, which owns the West Park along with six country inns, won the prestigious Pub Group of the Year in the Good Pub Guide 2015.

Chris Blundell, Director of Provenance Inns said: “The launch was fantastic and it was great to see so many people turn up to support us.

“Since we started this project over eighteen months ago, it’s brilliant to finally see the results of all the hard work put in by everyone involved. Now we’re just excited to be able to offer people a great experience when they visit West Park and build on the fantastic reputation of the Provenance Inns Group.”

Gary Verity, chief executive of Welcome to Yorkshire and credited for bringing the Tour de France to Yorkshire, said: “What Provenance Inns has done here with the West Park will be brilliant for Harrogate and great for Yorkshire.”

One of the guests, Peter Watson, commented on the ‘fantastic décor’, adding: “There are a lot of restaurants in Harrogate but not many places to have a drink and eat in such a fantastic setting, this is exactly what Harrogate has needed for a long time.”

Simon Kent, director of Harrogate International Centre, said: “The new West Park hotel is a valuable addition to the wide range of hotels and accommodation we have in Harrogate.

“The owners have made a fantastic job of taking the boutique hotel concept and raising it to a whole new level of luxury and quality.”

For further information about the hotel visit www.thewestparkhotel.com