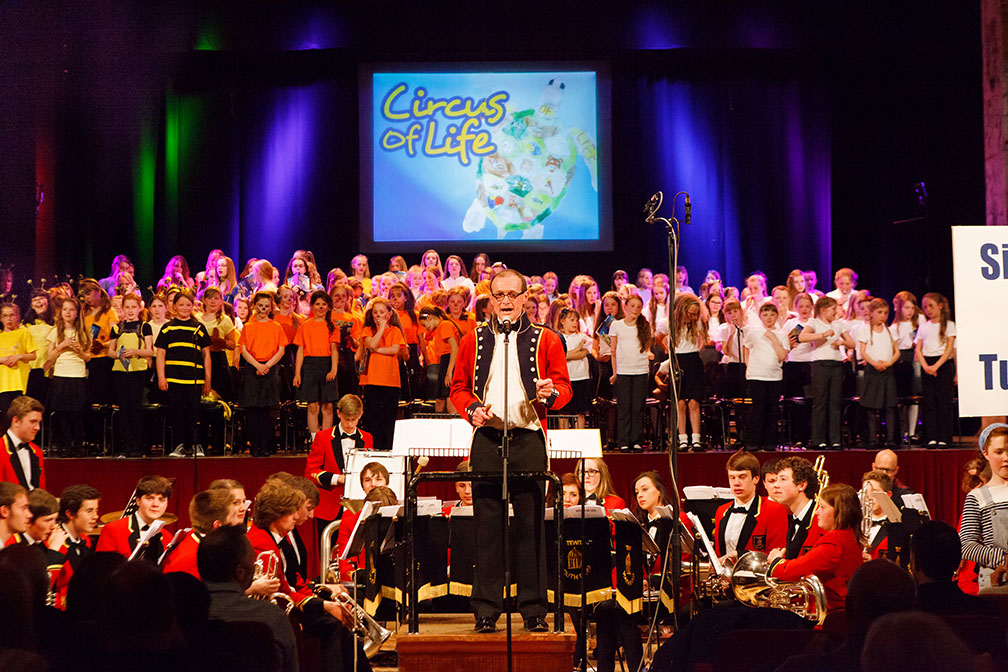 On 8 May 2015 choirs, mainly from Primary Schools from around the Harrogate district, will come together in the Royal Hall to give the fourth charity “Kids Aloud” concert organised by the Rotary Club of Harrogate Brigantes. However, this concert will be very different from those that preceded it. The second half will be devoted to a world premiere performance by the young musicians of a new work, Circus of Life which they have helped to create.

Circus of Life is a collaboration between local composer Philip Wilby, Brigantes club member Guy Wilson, and the young singers. Philip is well-known locally, especially for his work with the Black Dyke Band, and has collaborated on choral commissions before with Guy. Philip and Guy have provided a storyline and musical framework; the young musicians have worked on the words and music of the songs they will sing; and Philip and Guy are now pulling all these elements together into a coherent whole. If the rehearsal I attended and photographed is anything to go by, the final performance looks set to be both compelling and innovative.

In an engaging and exciting way the work uses a mix of poetry, folk tale and song to tell the story of evolution, highlight the plight of six endangered species and allow the young performers to teach us adults a timely lesson about looking after the creatures with whom we share this planet.

Previous “Kids Aloud” concert have proved to be memorable occasions for the young musicians involved. This one, with the young singers giving the first performance of a work that they have helped to create, should be something that they will remember for the rest of their lives, and we hope for some will be transformative.

Copyright in the new work is being vested in the Brigantes’ Club so there is one body that can encourage further performances. Philip and Guy are giving their services freely. Harrogate Borough Council Arts and Heritage Grant Fund has awarded the project a grant and energy company CNG is providing sponsorship support.

In past years a combination of ticket sales, donations and sponsorship has produced a substantial profit that has been donated to nominated good causes, thus giving the young musicians involved the added fulfilment of knowing that they have helped others less fortunate than themselves. This year we are hoping to raise between £6000 and £10,000 (the sum depending on number of tickets sold and number of adverts bought in the programme) for Harrogate Brigantes’ two current international projects – the provision of a sustainable supply of clean water in Africa through Sand Dams and the Club’s own IT and literacy project that is bringing computer skills to a remote valley in Nepal.

As part of the experience the young students and their schools have been invited to produce artwork to illustrate the stories told in Circus of Life. A competition was run for the best picture summarising Circus of Life. The winner, Sophie Brennan of North Rigton Church of England Primary School, was presented with a book token on 26 February by Brigantes’ President Peter Wood and CNG representative Abi Aldred. Her picture is being used on all the show’s marketing material and on the programme covers.

Guy Wilson commented: “We are trying to involve the students in as much of the creation and production of the show as possible. We hope the process and the end result will be for them an inspiring and unforgettable experience. Their efforts deserve a full house and I hope the people of Harrogate district will come and support them.”

The performance on May 8 will be both joyful and poignant because of the recent earthquake in Nepal. Part of the money raised for the concert is going to help sustain the Brigantes’ IT and literacy project in the Panchamul Valley, near Pokhara. Many of those involved in organising this concert have been to Nepal a number of times working on this and other projects and are currently very concerned for their many friends and colleagues there. The Rotary movement is helping raise funds for disaster relief and to establish much-needed food kitchens.

Brigantes President Peter Wood comments: “To put it bluntly, the more seats that we sell for the Kids Aloud Concert, the more funds we’ll be able to send to Nepal to help with disaster relief, general reconstruction, and repairing the damage done to our own project.” At the last count there were about 270 seats left to sell. Librettist Guy Wilson said “Originally we wanted to fill the Royal Hall to give the young people who have worked so hard on this musical project the experience of their lives. Now, we have another reason to sell out – the dire need of the people of Nepal for whom all who have visited there will have a very deep affection. Please come, and enjoy a fabulous evening and help us help them.”